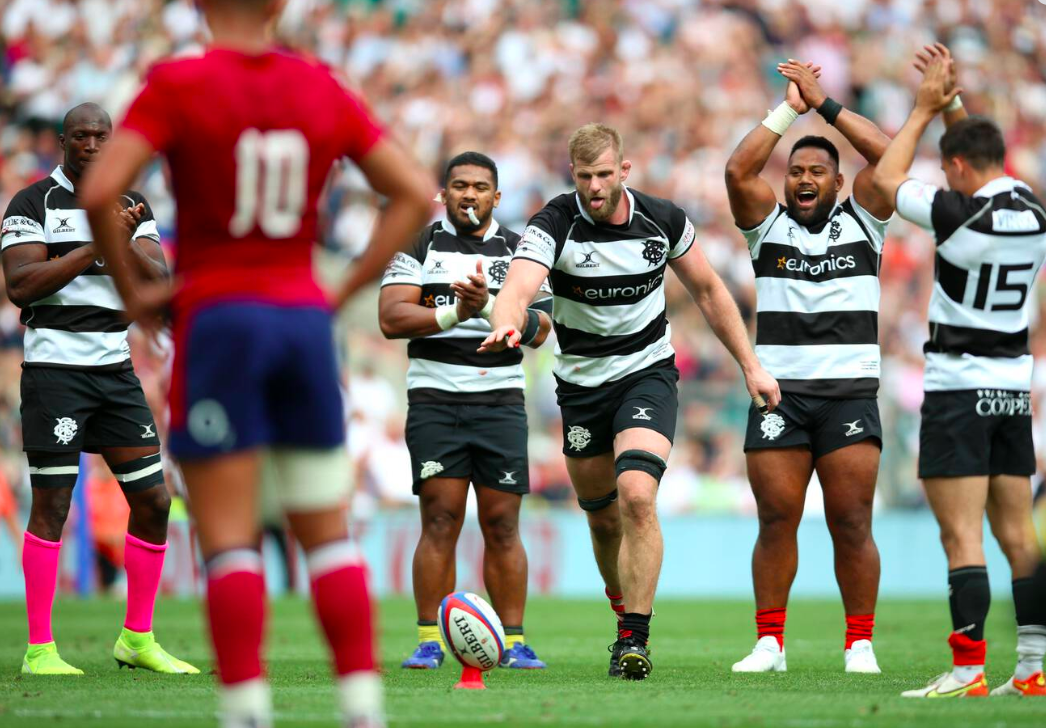 England made a dismal start to their Australian tour preparation as they suffered a record defeat to the Barbarians, who had to play more than half the game with 14 men after a red card to Will Skelton. The Baabaas took control of the contest early on after a penalty try and interception score for Charles Ollivon, before England got on the scoresheet through Joe Cokanasigna after a pair of Marcus Smith penalties. Skelton received a deserved red for a late, dangerous hit on Patrick Shickerling, but his side soon found themselves 26-11 up thanks to tries either side of the break from Damian Penaud and Baptiste Couilloud in the French-heavy Barbarians side, man-of the match and retiring George Kruis slotting a conversion after the latter. The lead stayed at 15 despite a well constructed Jonny May score, as Penaud crossed for a controversial second, and though Smith looked set to ignite a comeback, the Baabaas were home and dry as Louis Carbonel collected a chip over the top to take the visitors 17 points clear. And The Barbarians put the gloss on the win with a sensational late breakaway tries from Max Spring and Antoine Hastoy, topped with two more conversions from man-of-the-match Kruis which included one from a backheel. England struggle despite early ambition A number of England stars were missing from the squad – with players from Leicester and Saracens being unavailable due to playing in yesterday’s final –  which gave several players an opportunity to impress who would have otherwise been unlikely to feature, and they made an ambitious start in attack. But after the Baabaas missed a rare early shot at goal and Smith slotted one of this own for England, it was the perennial visitors that took charge soon after as Jonny May denied a clear try-scoring opportunity for Penaud, with the Gloucester winger heading to the sin bin and the Barbarians awarded a penalty try. The Baabaas struck again in quick succession as Ollivon brilliantly picked off Harry Randall’s pass before barrelling past him as he went over, with the Bristol scrum-half looking as if he had chased him down brilliantly having made the initial error. England looked to have swung momentum in their favour, and finally been given a reward for their attacking endeavour on the stroke of half-time, as Smith knocked over another penalty before superbly offloading to Tommy Freman, who fed Cokanasigna for England’s first try. But despite Skelton being given his marching orders for a late shoulder to the head of Shickerling, the Barbarians came straight back, Mark Atkinson finished what had been a poor half with by gifting the men in black and white their second interception try, Penaud the recipient who crossed from less than fifteen yards out. Baabaas keep England at arms length Despite trailing by eight points at the break, any players on the fringes of the squad had been given an even bigger chance to secure a place in Eddie Jones’ selection for their upcoming tour – set to be named at 9am on Monday – with the man advantage. But Couilloud snuck over from close range to stretch the Barbarians lead, and though May finished a well-constructed try for the hosts Penaud kept it at 15 points with an athletic – albeit controversial – finish in the corner. With a TV angle that only came after the try had been awarded showing Penaud’s heel was in touch, and England continuing to spurn opportunities, it looked as if this would not be their day, and though Smith crossed for a deserved score in a rare good display for England (although he was less impressive off the tee with 2/6), it would get much worse in the closing stages. Rampant Baabaas give Kruis perfect send off Hard to tell which of these teams have been on the sauce in Monaco this week…#ENGvBAR— Will Kelleher (@willgkelleher) June 19, 2022 There were questions over how good The Barbarians fitness would be, having spent the week enjoying Monaco in the build up and now having played with 14 men for over half an hour. But in a chastening last quarter of an hour for the hosts, and a brilliant one for the visitors, England would ship three more tries as the Baabaas went beyond 50 points. First Carbonel collected a chip through after sustained Baabaas pressure, before he provided his own chip for Spring, whi capped a length-of-the-field breakaway to secure the victory. England’s humiliation was complete as Hastoy ran in under the posts to give Kruis a third conversion shot, which he duly took having sent over the previous one with a backheel. Meanwhile when England attacked in the last 10 minutes they were making a series of increasingly comical handling errors, and were beginning to look considerably more tired than their opponents. The end of the game had turned a disappointing day into a dreadful one, and one that will give Eddie Jones plenty of food for thought ahead of the announcement he will have to make tomorrow. Teams and player ratings: England:  Rodd 4, Walker 5, Collier 4, Ewels 5, Hill 6, Curry (c) 6, Underhill 7, Chick 6, Randall 4, Smith 8, May 7, Atkinson 4, Marchant 6, Cokanasigna 7, Freeman 6 Replacements: Singleton 6, Goodrick-Clarke (not used), Schickerling 6, Lawes 5, Willis 5, Care 7, Bailey (not used), Nowell 5 Barbarians: Gros 8, Bourgarit 6, Gigashvili 7, Kruis 9, Skelton 3, Cretin 7, Ollivon (c) 8, Tanga 8, Couilloud 8, Hastoy 8, Niniashvili 7, Botia 7, Vakatawa 7, Penaud 8, Spring 8 Replacements: Priso 7, Tolofua 7, Falatea 7, Lavault 7, Le Garrec 7, Carbonel 9, Macalou 8, Vili 7 The post 14-man Baabaas hammer England appeared first on The Rugby Paper.