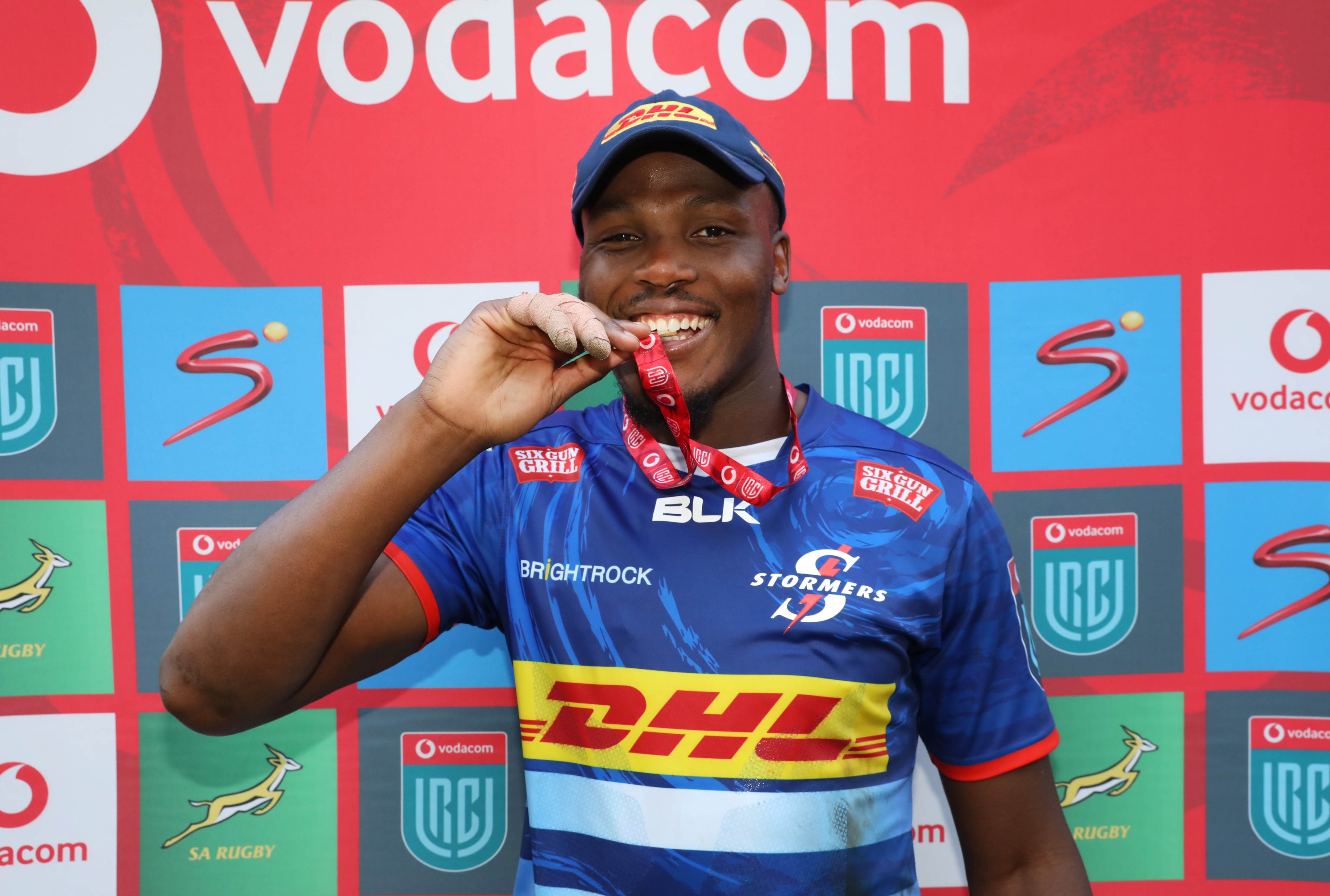 None celebrated winning the Vodacom United Rugby Championship Grand Final more than Hacjivah Dayimani, and the rapid loose forward is determined for the DHL Stormers to deliver a second successive title to the region. Media posts of Dayimani revelling in full team regalia went viral on social media after the inaugural URC final in June. The blindside flank recorded himself drinking champagne in the shower days after beating bitter rivals the Vodacom Bulls in the decider, and was pictured in various pubs and bars with fans around Cape Town. He was still in his match-day kit. STORMERS v EDINBURGH: Get your Stormers tickets HERE! Cape Town mayor Geordin Hill-Lewis even met up with the 25-year-old for a few beers, and the celebrations didn’t stop until the victorious Stormers squad took the URC trophy on an open-top bus parade in Cape Town. But, as pre-season training rolled around for the dual challenge of defending a title while debuting in the European Champions Cup, Dayimani was more than happy to put the champagne on ice. The smile remains but, instead of champagne, you’ll get grunt, sweat, toil and dedication at every training session and match. The rewards have been instant for the enigmatic loose forward, who opened his scoring account for the new term in the Stormers’ opener. He sprinted clear after a ruck turnover to dot down in a bonus-point win over Connacht in Stellenbosch, and his all-round efforts against the Irish were rewarded with the Man of the Match accolade. Known for his try-scoring breaks and speed, the versatile Dayimani last season showcased a harder edge to his game as he continued to complement athleticism with physicality, and his support play in the wide channels supplemented the strengths of abrasive No 8 Evan Roos and wily opensider Deon Fourie. Dobbo’s Diary: Boks are back to a new home Dayimani is unique in that he doesn’t fit into the conventional box assigned for any of the back-row positions, and the 1.88m, 100kg-plus forward has in his career slotted in among the backs. Last season, when the Stormers lost inside centre Rikus Pretorius to a long-term injury, Dayimani was ready to fill the midfield gap. “I’ve played 12 at the Lions, I’ve played wing against the Crusaders and I’ve played 13. Sometimes in a game in broken play, I’m always in the backline. I’m very comfortable slotting in wherever the team needs me,” said Dayimani. Such versatility is priceless to a Stormers team that will have to build their season around the requirements of the national team. The rangy No 7 could find himself plugging a hole at the back of the scrum while also foraging more in the rucks for steals, as Roos and Fourie are likely to feature on the Springboks’ end-of-year tour. READ: Roos reminds Bok coaches of his quality Yet, Dayimani is nothing if not confident and the former Jeppe High prodigy will shine as a go-to man for Stormers coach John Dobson going forward. “I believe that my circus act, and Evan’s circus act, and Deon’s circus act, is enough to go against anyone in the competition, especially if you do it right,” Dayimani said. “We all complement each other – if I create broken play, Evan survives and plays well, and Deon thrives. I always want to create moments for other guys to shine, and vice versa. “I just try to prove myself against the best every week, and for me it’s always personal … and to prove people wrong.” Get your Stormers SEASON TICKETS here!  Photo: Twitter/@THESTORMERS The post Lightning Dayimani ready to thunder appeared first on SA Rugby magazine.