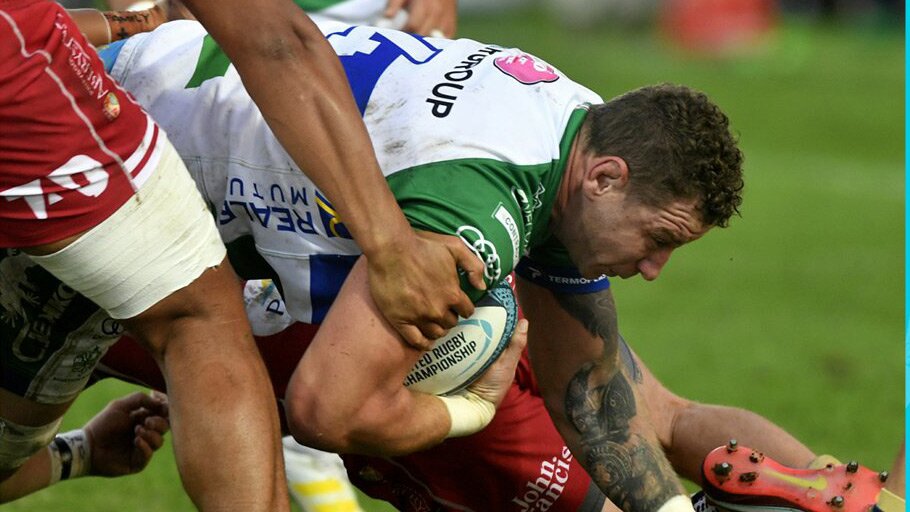 MATCH REPORT: Benetton held off a second-half Scarlets fightback to claim a 34-23 victory from their United Rugby Championship clash in Treviso.

Dwayne Peel's men trailed 26-9 heading into the final quarter but rallied with tries from Sione Kalamafoni and Johnny Williams, while the returning Leigh Halfpenny contributed nine points and Rhys Patchell four to the Scarlets' cause.

However, flyhalf Tomas Albornoz had laid a strong foundation for the home side, scoring their first 19 points, including a try on the half-hour mark. Edoardo Padovani and Tommaso Menoncello also went over after the break.

Rhyno Smith took on kicking duties from Albornoz late on and added five points as Benetton claimed a first win over the Scarlets since 2019.

Albornoz opened the scoring from the tee after five minutes.

Both sides struggled to make their mark on the game as the first half progressed, but Albornoz found a way over on the half-hour mark after some probing play by the home team.

He added the extras to his own try before sending over a penalty that was sandwiched between two from Halfpenny – playing for the first time since suffering a knee injury on Wales duty 15 months ago.

Halfpenny was joined in making a long-awaited return by international colleague Ken Owens, who came off the bench at half-time for his first outing since October 2021 following back trouble.

Albornoz quickly extended Benetton's lead from the tee at the start of the second half and the one-man show continued with another penalty.

The Argentina international was then key in the build-up to Padovani's try, picking up the loose ball before feeding his team-mate with a clever pass, with Smith adding the conversion.

The damage caused by that try was compounded for the Scarlets when Ryan Conbeer was yellow-carded for a dangerous tackle on Albornoz after he had shifted the ball to Padovani in the build-up.

The Scarlets showed signs of life when Kalamafoni touched down from a Dane Blacker tap-and-go, and they were right back in it after Williams evaded a tackler to dart over, with Patchell converting both to make it a three-point game.

Williams limped off soon after, leaving the Scarlets to play the last eight minutes a man down and, after Smith had added another penalty, Menoncello raced over for the final points of the match.

There was only one real contender for the individual honour. With clear-cut openings at a premium, Albornoz kept the scoreboard ticking over for the hosts, taking his try well, kicking faultlessly and then teeing up Padovani to go over as Benetton found their stride.

Albornoz's clever pass out of the back door for Padovani's touchdown was a thing of beauty. He took a heavy landing for his troubles too, with Conbeer sent to the sin bin for a dangerous late tackle on the flyhalf.

'We lost to ourselves': Blitzboks veteran on 38-0 final defeat to New Zealand

Hougaard the hero as Saracens edge Bristol with last-gasp try