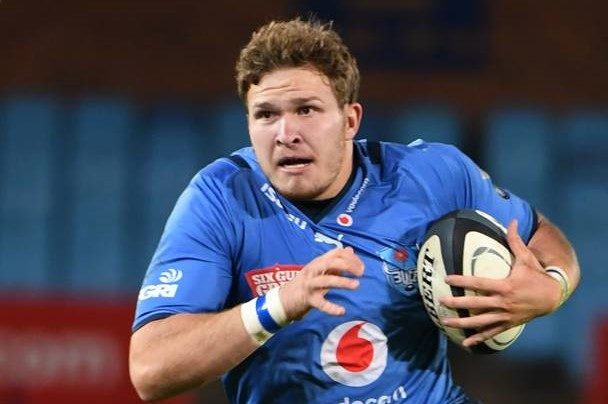 It took hooker Jan-Hendrik Wessels just 15 minutes to announce himself in the 2022/23 Vodacom United Rugby Championship in what was a powerful statement against the Emirates Lions. Wessels, 21, is a big unit and at 1.93m and 120kgs he’s taller and heavier than Springbok incumbent Malcolm Marx. It’s no surprise then that he made his name at Grey College, steamrolling tacklers and demolishing scrums as a juggernaut loosehead prop. READ: ‘Samoan Juggernaut’ to bust walls for Stormers Wessels’ highlights caught the eye of scouts across the rugby world and the final bell was still echoing in the matric quad when he jogged off the main field at the prestigious school in Bloemfontein and onto Stade Marcel-Michelin at Top 14 club Clermont Auvergne in France. Wessels moved to Loftus Versfeld in 2020, arriving at the renowned stadium in the slipstream of his reputation and rumours that he was destined to be a Springbok great. Coach Jake White saw the same destination for a player likened to a young Os du Randt, but by a different route and, after test-driving the megalith on either side of the front row to mixed results, he reassigned Wessels as a project hooker. Du Randt lauded the youngster’s raw power and obvious potential but warned that making a successful switch to hooker would require more toil than peeling off the old jersey and squeezing into the No 2 shirt. Wessels did what he does best and ran straight at the challenge to complement his heavyweight contributions in general play with the technical nous required to similarly dominate the scrum and lineout. White gave Wessels plenty of time to get reps in training without prematurely exposing him to the demands of the league. The recruit hooker played just 62 minutes in five appearances during the inaugural Vodacom URC campaign, biding his time behind Johan Grobbelaar and Bismarck du Plessis on the Vodacom Bulls depth chart – the former is currently in the wider Springbok group and close to earning his first Test cap; the latter is a 79-Test Bok, 2007 Rugby World Cup winner and at one time regarded the most ferocious player on the planet. The dawn of a new season has coincided with a change to the pecking order in Pretoria as White continues to mine the rich deposit of young talent at the Vodacom Bulls. Wessels thundered off the wood in last week’s season-opener and marked his 15-minute cameo by scoring a try in a 31-15 win against the Emirates Lions. Du Plessis was 21 when he made his Super Rugby debut for the Sharks and Wessels exhibits many of the same traits that made the veteran rake a mainstay of the Bok pack for eight years. The post Wonder kid Wessels to keep Bulls rumbling forward appeared first on SA Rugby magazine.