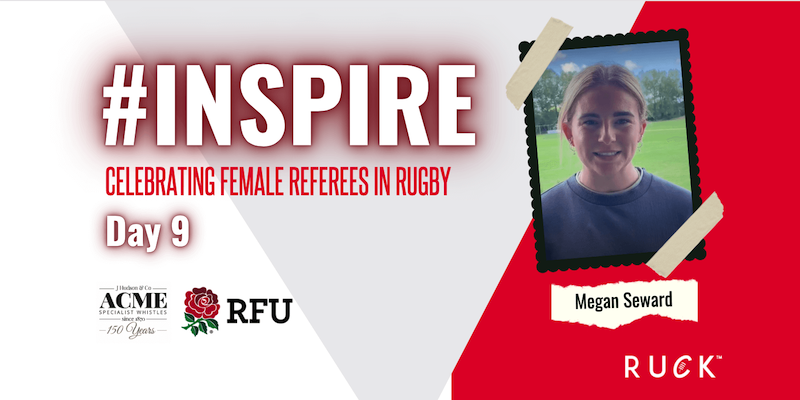 #inspire – celebrating female referee’s in rugby Megan Seward has been officiating for two years. Megan is a PE teacher, as well as a rugby player and official. She has the rugby community to thank for supporting her rugby career to-date, especially Andrew turner who has been a fundamental part of rugby and player development in the West Sussex/Horsham area. In collaboration with our partners at ACME Whistles, we met up with Megan to chat about her involvement in rugby, who inspires her and how she was the first female to officiate for a National 2 level game. Can you tell us a little about your relationship with rugby? I am a qualified teacher of Physical Education, as well as a rugby player and referee. I support our local rugby club in a number of ways offering support to new players, running the social media and drumming up as much support for the club and rugby as possible. I’m also a referee and assistant referee for the Guernsey Raiders 1st team, the Islands second team and the Women and girls games. I have been inspired by a number of players and coaches and love that we (the referees) nationwide are very much a community.  What was your first experience as a Match Official like? Thrown in the deep end!! Nervous as anything and almost certain I was not going in the middle. When my fellow referees had come up with a plan to get me in the middle i.e. faked an injury and it was either A) cancel the game or B) Megan goes in. Low and behold I did it and loved it! Tell us about your most memorable officiating moment to date. Being the first Female to be involved in the refereeing team for a National 2 level game, in Guernsey for the Mens Nat 2 side. Who inspired you to take up the whistle? Andy, Steve and David are role models from the UK and Guernsey. They encouraged me to take up the whistle to become a better player, teacher, referee and coach. What motivates you to referee? The fact the sport goes on. Without the refereeing team matches cannot happen. Inspiring young and current players to play and also allowing vets to enjoy a sport they once played. In a few words, please tell us what it means to you to be a positive role model and INSPIRE other women and girls to get in to refereeing Having encouraged a number of young girls on the island to get into the sport, to go on and be successful and find joy in the sport is what it is all about. The real sense of finding belonging in a sport and in their team is what inspires me to continue! If you’re feeling inspired to take up the whistle, find out more about becoming a Match Official here: keepyourbootson.co.uk/referee-toolkit/supporting-match-officials-female/   The post #9 Megan Seward appeared first on Ruck.