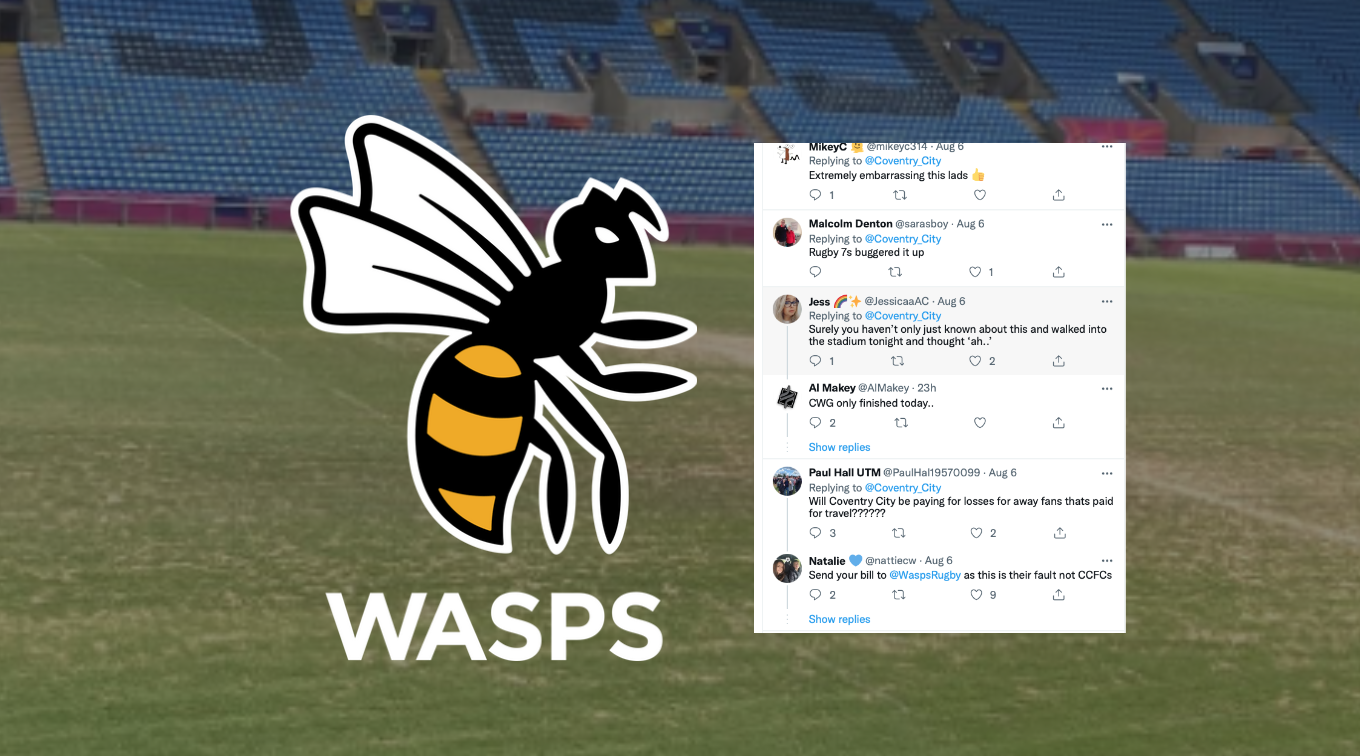 Football fans are furious with Wasps after the state of the pitch following the Commonwealth Games led to Coventry’s first home game of the season being postponed. Coventry initially wrote in a statement : “Promised investment by the Arena into a new pitch has unfortunately not materialised over the Summer, which has been compounded by concerts on the pitch and then a huge amount of use at the Commonwealth Games last weekend.” Wasps quickly responded, writing: “Unfortunately, it has not been possible to prepare the pitch to the standard required for Sunday’s game. The decision to schedule the Rotherham fixture at the arena for this weekend was taken after talks with the EFL and Coventry City. “Coventry City were understandably keen to play at home despite the extremely short turnaround following the Commonwealth Games, and Birmingham 2022 agreed to accommodate the request, despite having an exclusive tenancy agreement until 14 August. “We are implementing an action plan to ensure the pitch is repaired and available as soon as possible.” NEWS: Coventry City are extremely disappointed to confirm that Sunday’s game against Rotherham United has been postponed. #PUSB https://t.co/0MGVjpihhz pic.twitter.com/AMLcdsXYG2— Coventry City (@Coventry_City) August 6, 2022 However, this statement did little to dampen the fury of Coventry fans. “Get wasps out!” wrote one furious supporter. Another added: “hope the club are compensated by Wasps as there will be lost revenue with the match rearranged to mid week. Anyone given a thought to fans who have lost their train costs?” “The absolute state of that pitch is disgusting. Certainly not the clubs fault, nor the fans (obviously) Them egg chasers are to blame, shouldn’t be allowed to leave it in a state like that. What a joke.” commented a third. EDITORS PICKS: Wales international forced to wear England jersey on his stag do“He loved it” – 5 legendary Martin Johnson fightsSir Ian McGeechan’s dream team is rather good5 big Premiership transfers that will still definitely happen Rugby star Gareth Thomas being sued by ex-partner The post Furious football fans slam Wasps statement appeared first on Ruck.