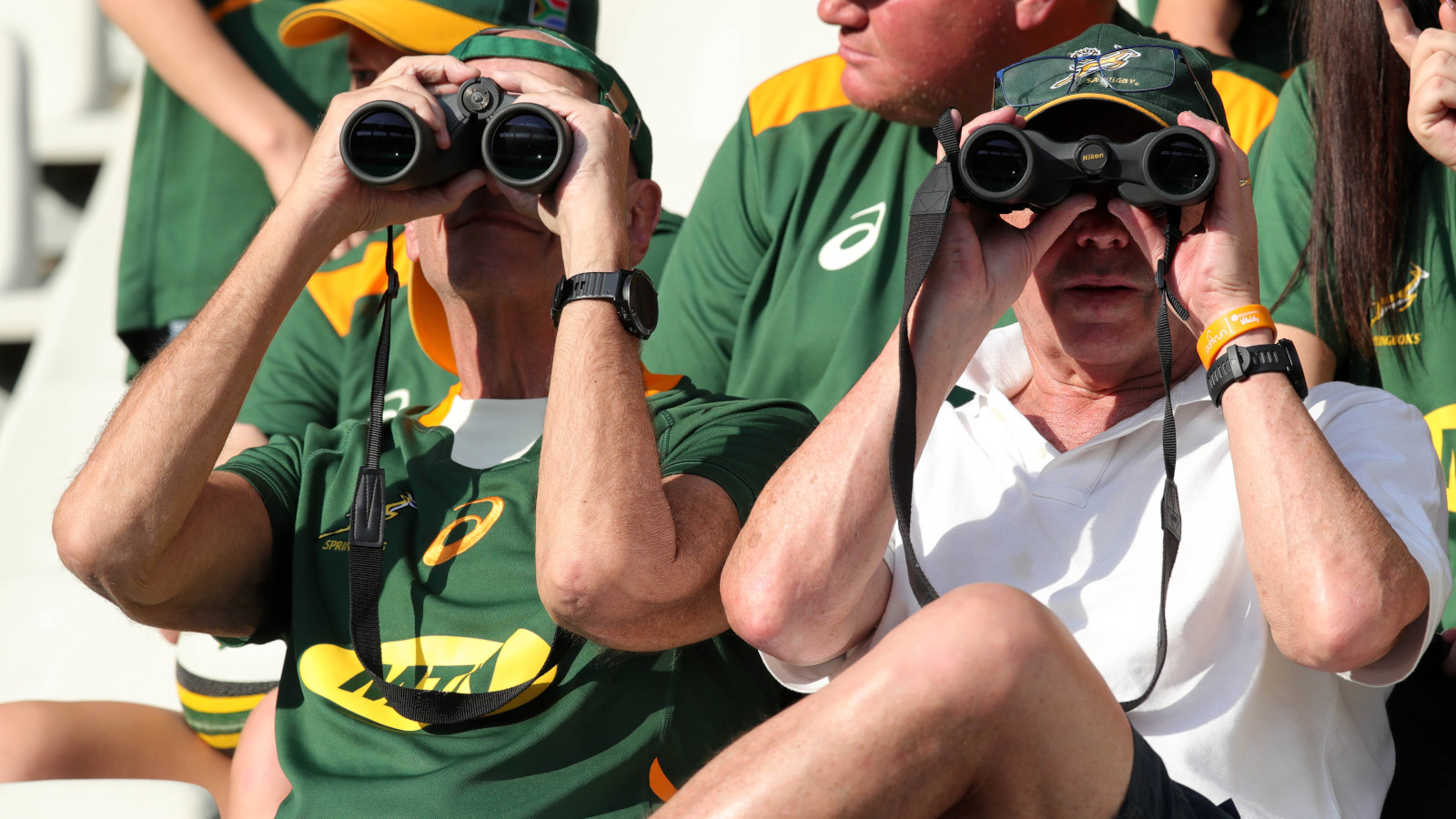 The absence of RG Snyman has diluted the potency of a potentially invincible Springbok forward group since the 2019 Rugby World Cup, writes Jon Cardinelli.

Nobody asked this question during the Boks’ three-Test series against Wales, or across the 2021 season. Few eyebrows were raised when the hulking hooker played from the bench over the course of the 2019 World Cup play-offs.

Marx wore the number two jersey against the All Blacks in the first World Cup pool match in Japan. When coach Rassie Erasmus moved Marx to the bench for the must-win clash against Italy, he explained that Bongi Mbonambi was better suited to the set-piece grind of the first half, while Marx – an explosive ball-carrier and one of the best fetchers in the game – was a potential match-winner against a tiring opposition in the second stanza.

This theory – and indeed Erasmus’ six-two bench strategy – wasn’t immediately accepted. But as the play-offs unfolded, it became clear that there was a method to Erasmus’ so-called madness.

By the end of the World Cup final, all and sundry had accepted that the men of the bench were as good as those in the starting line-up. England coach Eddie Jones went as far to say that the Bomb Squad was stronger than the starting pack.

Since that fixture against Italy, Marx has started in just two out of 23 Tests.

Despite his lot as a sub, his value and status as one of the best players in the group was never questioned over the 2021 season. He played more minutes than any other front-ranker across the three-Test series this past July – even though he started from the bench in each match.

When Marx was given the opportunity to start against the All Blacks in Mbombela, he produced a man-of-the-match performance. Many felt that he should have been backed to start in the second game against New Zealand in Johannesburg – but Jacques Nienaber reverted to a formula that had worked for the Boks since the 2019 World Cup.

Mbonambi injury should have prompted a rethink

With both of his star hookers available, it was a sound decision.

The Springboks have won a host of big Tests, series and tournaments with Mbonambi as the starter and Marx as the finisher. The six-two split on the bench has served Nienaber and Erasmus well over the past three years – it certainly was crucial to their success a week earlier in Mbombela – and they had reason to believe it would produce the goods at Ellis Park.

But when Mbonambi sustained a serious knee injury in training only a couple of hours after the team announcement, Nienaber should have reconsidered the call to bench Marx.

There is enough evidence to support the argument for Mbonambi starting and Marx finishing, as both have specific roles to play within the Bok game plan, and both boast more than 50 Test caps – as well as the experience of winning a Rugby Championship, a World Cup, and a series against the British & Irish Lions.

Casting Joseph Dweba in the “Mbonambi role” for such a big clash, however, was a mistake.

Playing in only his third Test, Dweba was targeted by the All Blacks – lineout maestro Sam Whitelock in particular – at the set-pieces. The ploy of fielding Marx in the latter stages might be sound, but the strategy of starting an international rookie when a 50-Test veteran is on the bench is far from it.

The six-two bench strategy was nearly two years in the making. After Erasmus and Nienaber joined the Bok management team, they favoured a five-three split in all 14 Tests played over the course of the 2018 season.

Erasmus made it clear that he was developing a wider group of players with the 2019 World Cup in mind. At the same time, he was under pressure to produce results, and thus more reluctant to select some of his best players on the bench.

The first time Erasmus included six forwards on the bench was against Argentina at Loftus Versfeld shortly before the squad’s departure for the 2019 World Cup. Only two of those six made the cut for the World Cup squad, but the seed of an idea began to take root.

Since and including that friendly against Argentina in August 2019, Erasmus and Nienaber have opted for a six-two bench in 15 out of 27 Tests.

It’s been interesting to note when exactly they have opted for the extra forward among the subs and – this is a key difference – when they have selected a second lock, and ultimately a second tight five, in the matchday 23.

At the 2019 World Cup, Erasmus first opted for a six-two split in the pool match against Italy. That bench combination included the second tight five unit of Steven Kitshoff, Marx, Vincent Koch, Snyman and Franco Mostert.

The same forward combinations were favoured in the play-offs against Japan, Wales, and England. After the starting team absorbed the pressure in the first half, Erasmus deployed his Bomb Squad to brutal effect.

In the second stanza of each play-off, the Boks lifted the intensity and piled on the points. They were especially good in the second half against Japan (21 points) and England (20).

Over the course of the 2021 season, however, the Boks varied their bench selections. Nienaber favoured a five-three split between forwards and backs in eight out of 13 Tests.

The six-two bench strategy was used in five games – the second Test against the Lions, the two matches against Argentina, and the double-header against the Wallabies in Australia.

The Boks had mixed success in these matches, harnessing the power of the Bomb Squad to put 21 points past the Lions in the second half, and to bury Argentina in both of the games staged in Gqeberha.

Teenager Canan Moodie features in the Springboks squad for their two-Test tour of Australia. #AUSvRSA#RugbyChampionshippic.twitter.com/1eJLwqpNkC

The bench fired in the second stanza of the first Test against the Wallabies, but failed to prevent a narrow defeat. In the following fixture in Brisbane, the Boks started poorly and the subs struggled to provide the group with a much-needed boost. The Wallabies won 30-17.

Over the course of 2021 – and in four out of five matches in 2022 – the Boks favoured an extra loose forward rather than a lock in the six-two split. It’s a departure from the formula used at the 2019 World Cup, and may have something to do with the absence of one of their best second-rows.

Snyman’s absence and a reliance on Etzebeth

Snyman has struggled with injuries over the past three years, and has played precious few matches for Irish club Munster. The giant lock hasn’t played a Test for the Boks since the 2019 World Cup final.

Snyman’s absence has influenced the Bok selection policy in 2021 and 2022. Eben Etzebeth has been asked to carry a heavier load.

Etzebeth was one of the best players on show in 2021, and yet there was some concern about the number of minutes he racked up over 12 of South Africa’s 13 Tests.

The number four lock has been one of the standouts for the Boks this season – at the gainline, lineout and as part of the kick-chase strategy. But according to statistician Russ Petty, Etzebeth is the only South African forward that has played more than 300 minutes (365) over the course of five games.

South Africa boast plenty of depth in most positions, but are short on experienced options at number four. Marvin Orie has started there before, but is more in the number five mould, as is the veteran Mostert.

Salmaan Moerat could potentially fill the void in more ways than one. The specialist number four earned a Springbok call-up on the back of his physical exploits for the Stormers in their title-winning United Rugby Championship campaign. Moerat made his Test debut in the first Test against Wales, and was part of a six-two bench in the clash against the All Blacks in Mbombela.

The Boks beat the All Blacks 26-10 in that fixture. It’s worth noting that Moerat was one of two locks on the bench in that Test and that – for the first time since the 2019 World Cup final – South Africa included a second tight-five unit among the subs.

Is this a sign of things to come? In Snyman’s absence, will the 24-year-old Moerat prove to be the missing piece of the six-two puzzle? Or are the coaches intent on playing Etzebeth as much as possible on the coming tour to Australia?

How leadership dynamics could influence selections

One has to consider the balance of the side and the leadership dynamics when answering these questions.

Duane Vermeulen recently returned from a long injury lay-off, and only played 35 minutes against the All Blacks at Ellis Park in his comeback match. Vermeulen is typically an 80-minute player, and if he can’t fulfil that role, the Boks have to ensure that they have sufficient cover – read more loose forwards – on the bench.

Neither Vermeulen – one of the team’s leaders – nor captain Siya Kolisi finished the recent game against the All Blacks. This may have influenced the decision to keep Etzebeth – another former Bok captain – on the field at a time when the game was still in the balance.

The Boks may change tack when they head to Australia for a two-Test tour. Ideally, they’d want Snyman in tow as part of a reserve tight five. At some point, they may need to trust the less experienced Moerat to produce the goods – and to help the pack harness its full potential as it did at the 2019 World Cup.

As was the case in 2019, the availability of a bona fide utility back will be crucial to the success of a six-two strategy.

Willie le Roux has played the role with some success in recent months. While his attacking performances have lent the Boks plenty of bite, his inability to play centre or wing has often resulted in a backline reshuffle that’s done more harm than good to the side’s defence.

Frans Steyn – who recently recovered from a hamstring injury – is more versatile than Le Roux and may provide a solution. The veteran wore the number 23 jersey across the 2019 World Cup play-offs, covering fly-half, both centres, and full-back.

It wouldn’t come as a surprise to see Steyn covering these positions Down Under, and ensuring that the Boks maintain their high defensive standards over the course of 80 minutes.

Report: John Cooney Could Line Out For Scotland At The Rugby World Cup

'Send him for many reasons': Ex-All Black first five backs Julian Savea for All Blacks XV