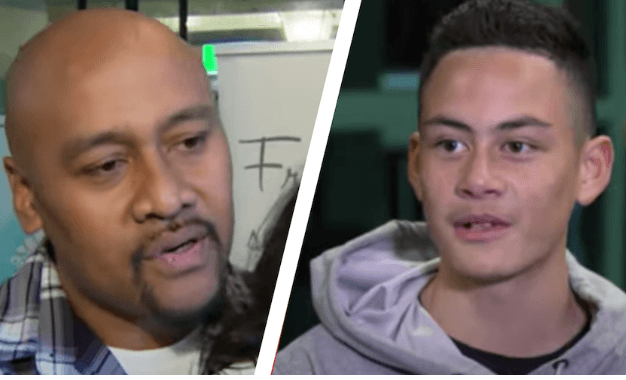 The boys of the late great Jonah Lomu are aiming to make an impact in a different field. Lomu, a legend of world rugby, died in 2015 from complications following a kidney condition. Both boys,Dhyreille and Brayley, have dreams of becoming the best, just like their dad Jonah. “To be the best tennis player in the world you should put in effort and always try hard,” 10-year-old Brayley said. Only playing for three-and-a-half-years, the pair are reaching for the sky. “My dream is to become a number one professional tennis player in the world,” Dhyreille, 12, said. “Dad will always be the best and I thought to maybe give something else a try cause I’ll never be better than him,”. EDITORS PICKS: Saracens star cited for dangerous tackle against LeicesterNewcastle Falcons release four of their major starsSir Clive Woodward slams Eddie Jones once again in latest columnBristol Bears sign 14th new player for next season5 rugby stars who went viral before turning professional Still playing a bit of rugby, Dhyreille, who was born in Marseille, revealed he’d rather play for France in the Six Nations for the same reason. Below, we look at five other rugby legends sons who are making waves, but currently want to represent different countries to their legendary Fathers. #1. Louis Lynagh Age: 21Club: HarlequinsPosition: FullbackDad: Michael Lynagh (Australia) The son of Wallabies legend Michael Lynagh, the fullback made his Premiership debut during the final round of the 2019/20 Gallagher season against Leicester Tigers. He was called up to Eddie Jones squad for the Autumn Nations Series and Six Nations but has yet to be capped by the men in white CONTINUES ON PAGE 2 The post “Proper talent” – Jonah Lomu’s sons are excelling in their chosen sport appeared first on Ruck.

How To Watch Ireland v Maori All Blacks In Tour Opener