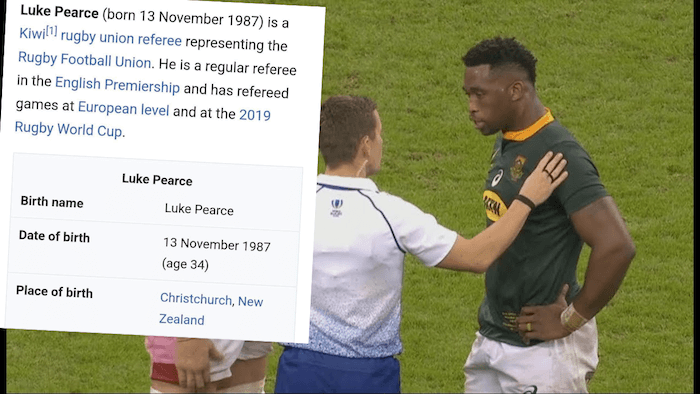 Springboks supporters haven’t taken their defeat against the All Blacks well with a number of ‘fans’ targeting referee Luke Pearce with abuse. New Zealand ran out 35-23 winners against South Africa at Ellis Park. Some even took to the English whistleblowers website to change his birthplace on Wikipedia to Christchurch, New Zealand. Fans across at SARUGBYMAG have ran a poll on his performance with 34% rating his performance as very poor. One fan wrote: “A dare you to find a more cynical refereeing display than Luke Pearce here. Got the microscope out for the Boks on every single play. Not so much for the ABs.” “The Boks certainly didnt deserve to win tonight but the ref made some really bad calls at critical times that took our oemf away,not good at all,” former player Breyton Paulse wrote. A third added: “The All Blacks (read A.Savea) were so good and probably deserved the win but Luke Pearce was absolutely disgraceful.” EDITORS PICKS: Zinzan Brooke’s son confirms he will not play for All BlacksWasps confirm 11 departures as financial woes continueNigel Owens ranks the five best stadium’s in the WORLD!Phil Vickery ranks his five toughest opponentsMartin Bayfield’s acting career: Films, TV and cameos The jobs of five rugby referee’s away from the pitch Behind the glitz and glamour of the international rugby, many world-class referees must work around the clock to fund their rugby dream. #1. Romain Poite – Police Detective  Poite is set to referee his final international match this weekend – World Rugby have confirmed this morning. The popular Frenchman, who made his debut in 2006, will take charge of his 72nd test match, cementing his status in third on the all-time list of test match appearances behind Nigel Owens (100) and Wayne Barnes (96). Before becoming a referee, the 45-year-old was a police detective in Toulouse. During the Autumn Nations Series, he will be tackling a different sort of law-breaker after putting down the baton for the referee’s whistle in 2007. He’s expected to return to the police once he stops refereeing completely. CONTINUES ON PAGE TWO The post South African fans slam referee Luke Pearce and change his Wikipedia appeared first on Ruck.

Report: John Cooney Could Line Out For Scotland At The Rugby World Cup

'Send him for many reasons': Ex-All Black first five backs Julian Savea for All Blacks XV