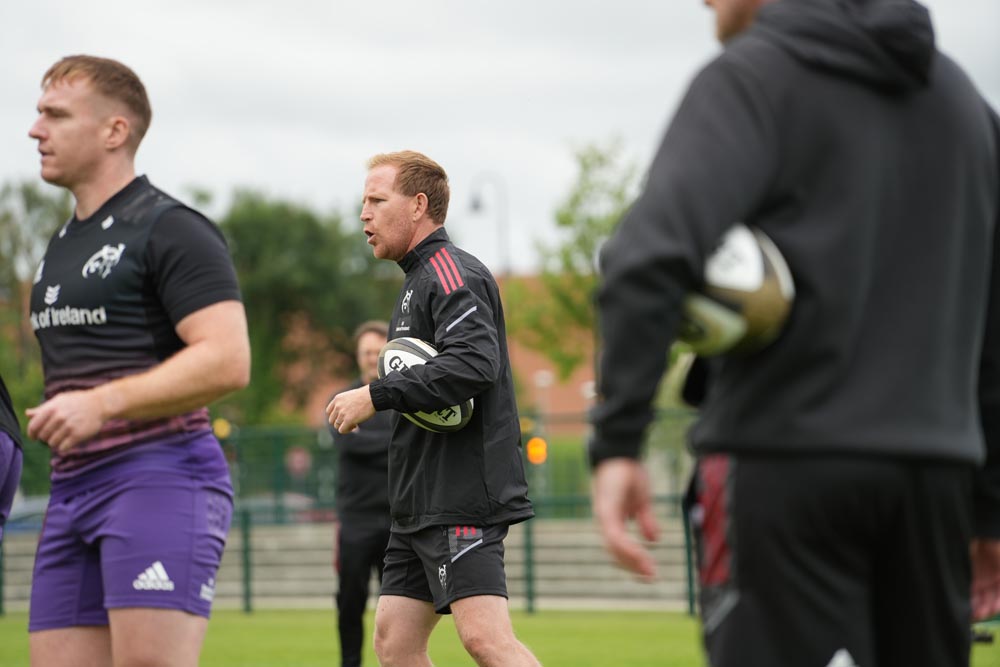 A new-look coaching team will lead Munster Rugby this season with Head Coach Graham Rowntree joined by Mike Prendergast, Andi Kyriacou and Denis Leamy. New Attack Coach Prendergast joined from Racing 92, Forwards Coach Kyriacou was promoted from his role as Elite Player Development Officer and Defence Coach Leamy has returned from Leinster. See profiles for the three new members of the coaching team below. Scroll down to watch Graham Rowntree’s first interview as Munster Head Coach. Mike Prendergast – Attack Coach Mike Prendergast has joined Munster from Top 14 side Racing 92, where he held the role of  Attack and Backs Coach since 2019. Prendergast has a wealth of experience of coaching at the top level and in addition to Racing 92 he has held assistant coaching roles with Stade Francais, Oyannax Rugby and Grenoble FCG since making the move to France in 2013. On completing his professional playing career in 2009 the scrum-half continued playing with his club Young Munster RFC while also progressing on the coaching front as he held Head Coach and Director of Rugby roles with the Limerick side. On the provincial coaching front, he previously worked closely with Academy Manager Ian Costello and Team Manager Niall O’Donovan when overseeing the backline for the Munster A’s that enjoyed British and Irish Cup success in 2012. Andi Kyriacou – Forwards Coach Andi Kyriacou has been promoted from his role as an Elite Player Development Officer with the Greencore Munster Rugby Academy, a position he held since April 2021. From England, the former hooker lined out for the province during the 2006/07 season when on loan from Saracens and went on to represent Ulster and Cardiff Rugby before retiring from the professional game in 2013. Over the last decade he has held numerous coaching roles in the areas of the scrum, defence, skills, and forwards working with Cardiff Rugby, Sale Sharks, Russia Rugby and Nottingham. Andi Kyriacou prior to Munster’s Champions Cup clash against Wasps in Coventry. Denis Leamy – Defence Coach Denis Leamy returned to Munster after a three-year spell at Leinster, where he first held a role as an Elite Player Development Officer before moving up to the role of Contact Skills Coach in October 2021. Following a hugely successful playing career with Munster and Ireland Leamy’s coaching career saw him work with several sides across the province over seven years including Young Munster RFC, Rockwell College, Clonmel RFC, Cashel RFC and Garryowen FC. On the provincial front the Tipperary native also worked at various stages with Munster’s age-grade players and the ‘A’ team before making the move to Leinster. He joined the Ireland U20s team as Assistant Coach for the 2021 Six Nations campaign. New Defence Coach Denis Leamy. Video | Graham Rowntree Interview ﻿ The post Munster Rugby New Coaches | 2022/23 appeared first on Munster Rugby.